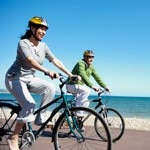 A study by Walker, T. et al 1 found that 98% of Oxford Domed Lateral Patients Successfully Return to Sport and Recreational Activity after Surgery.

Only one patient quit his activities entirely after surgery, resulting in a return to activity rate of 97.8%. The study further shows that 66% of the patients were highly active at 3 year follow-up (UCLA >7.0), and all clinical scores as well as the mean knee flexion showed significant improvement post-op (at 3 years) over pre-op.

The study shows that patients can, independent of age or gender, successfully return to sports and recreational activity with an Oxford Domed Lateral in place, with two-thirds of the patients reaching a high activity level (UCLA>7.0). The authors also reported that their patients were not limited by the functional performance of the Oxford Domed Lateral, but rather by the patients' personal decision to quit their high impact activities with the intention of preserving the prosthesis. The authors finally concluded that the patients' reported quality of life (as measured by the SF-36) was on the same level as the quality of life of people without any medical disorders.

The authors report that this is the only study to their knowledge that researched return to sport for lateral UKA, but did draw the comparison to other papers that reported similar results for medial UKA2-4.